Talking Santa for your Android phone is easily one of the most versatile interactive character apps in the marketplace. 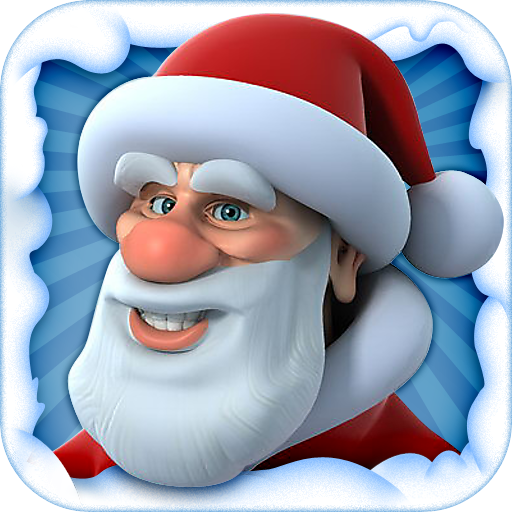 The basic premise of this app is no different from any of the other “talking” character apps out there. There’s a goofy character on the screen who repeats everything you say, laughs when you tickle him, and howls in pain when you smack or punch him. In this case, however, it’s Santa Claus who’s hanging out on your phone, and he does so much more than just react to your pokes and the sound of your voice.

Click on any of the icons positioned along the top and bottom of the screen, and you can feed him cookies and milk, run him over with a giant snowball, have him pull presents from his sack, and even make funny postcards that can be sent to friends via email. I played with this app for a sizable chunk of time, and noticed that old Kris Kringle never pulled the same gift out of his sack more than once. It really is a magical Christmas sack!

One especially exciting feature is the ability to record a video you do, and then play it, save it, upload it, and share it with family and friends.

The aesthetic of the graphics in this app is a huge part of the reason I enjoyed Talking Santa so much. Both the background and Santa, himself, are in this clay-like style that’s similar to the classic claymation movies we all watched as kids. One complaint, however, is that when Santa starts talking, the animation doesn’t look as realistic as it should. And that’s not the only thing that seems off here.

Something’s also a bit weird about the way Santa talks. The way the app seems to work is that it recreates the sounds it hears by just making the tone deeper. Sometimes this is effective, and Santa does sound like his jolly old self. Other times, it just sounds like the app did a comically poor job of deepening my voice. When he recites his programmed, cheery exclamations, like “HO! HO! HO!,” he sounds a bit like Jabba the Hut.

Overall, this is a really fun free app that will surely get the whole family, especially the little ones, into the holiday spirit.

Spin for your dinner with the Allrecipes.com Android app

Light up your Android with the free New Year Fireworks app

December 29, 2010
There are no comments yet No comments