Ready for another dose of free-running side scrolling games? While the weekly additions are yet to buckle the genre into obscurity, there’s just something about Canabalt before it, you can control Barry’s actions by tapping the screen to make him jump – simple enough – but thanks to an endless hail of bullets, missiles, lasers and Barry’s handy jetpack, things can get a little hectic. 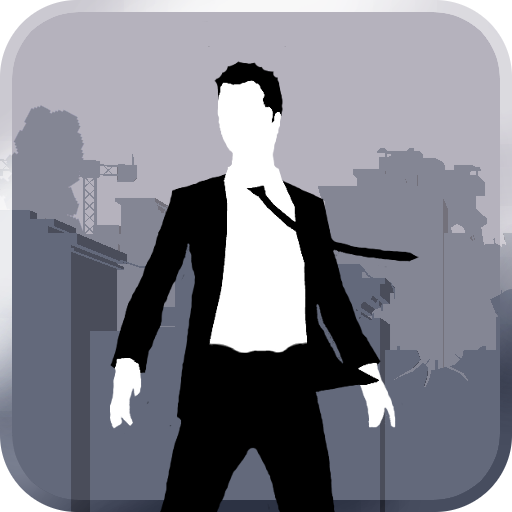 Speaking of jetpacks, Barry’s thrusters allow the player to ascend and descend through hazardous obstacles. By holding your finger on the screen you can propel Barry upwards. Let go, and he quickly descends. It’s a simple mechanic but relies heavily on player reflexes and instinct. Barry’s jetpack is no ordinary jetpack either. Instead of flames, the jetpack rains bullets and can hit anyone unlucky enough to  be underneath its radar.

Aside from the titular propellers, Barry can hop on one of the many vehicles that litter the stages. Some, like the motorcycle, allow Barry to quickly go through the stage. Others, like a mech suit, lets you stomp enemies and glide through traps. They’re varied and once they appear on stage, it becomes a mad dash to collect. They can also act as a “second life” as bumping into obstacles while on a vehicle does not penalize the round.

The stages are littered with coins which players can collect to purchase costumes, jetpack modifications, gadgets, vehicle upgrades and perishable items. Purchasing most of these goodies are quite rewarding and can help you gain more than a few yards. One, for example, allows you to magnetically collect nearby coins. Despite being a free-to-play game, these extras never feel out of range and can easily be gained by skillful players. Of course, you can just purchase them all out by dropping real-world dollars – it’s less rewarding, but can save you some time.

Jetpack Joyride has an achievement system that awards you extra coins. They range from incredibly easy (run 300-400 yards) to difficult (avoid 10 close calls with lasers). Fulfill these objectives and you’re rewarded with a star. Collect enough stars and you can cash them in for coins and gain a rank. Though, aside from the extra coins, there’s not much incentive in ranking up.

Canabalt’s minimalist look was artistic. Unfortunately Jetpack Joyride visual doesn’t bode as well. While the cartoony graphics are passable, the use of low resolution sprites in this day and age is just unacceptable. A screen sporting 3-inches and above, or any high-def screen, are going to be staring at some pixelation. It doesn’t detract from the overall experience, but its a shame the developers couldn’t pony up for some HD visuals like the iOS version.

Bottom line, Jetpack Joyride is a fun and addicting game. Despite the lackluster visuals, its core game mechanic and extras are worth sinking some time into.